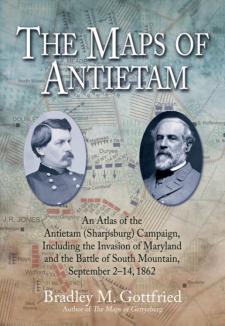 The Maps of Antietam: An Atlas of the Antietam (Sharpsburg) Campaign is the eagerly awaited companion volume to Bradley M. Gottfried’s bestselling The Maps of Gettysburg (2007) and The Maps of First Bull Run (2009), part of the ongoing Savas Beatie Military Atlas Series.

Now available as an ebook short, The Maps of Antietam: An Atlas of the Antietam (Sharpsburg) Campaign, Including the Invasion of Maryland and the Battle of South Mountain, September 2 – 14, 1862 plows new ground in the study of the campaign by breaking down the entire campaign in 44 detailed full page original maps. These cartographic creations bore down to the regimental level, offering students of the campaign a unique and fascinating approach to studying what may have been the climactic battle of the war.

The Maps of Antietam: An Atlas of the Antietam (Sharpsburg) Campaign, Including the Invasion of Maryland and the Battle of South Mountain, September 2 – 14, 1862 offers seven “action-sections” including:

Gottfried’s original maps enrich each map section. Keyed to each piece of cartography is detailed text about the units, personnel, movements, and combat (including quotes from eyewitnesses) that make the Antietam story come alive. This presentation allows readers to easily and quickly find a map and text on virtually any portion of the campaign. Serious students of the battle will appreciate the extensive endnotes and will want to take this book with them on their trips to the battlefield.

Perfect for the easy chair or for walking hallowed ground, The Maps of Antietam is a seminal work that, like his earlier Gettysburg and First Bull Run studies, belongs on the bookshelf of every serious and casual student of the Civil War.