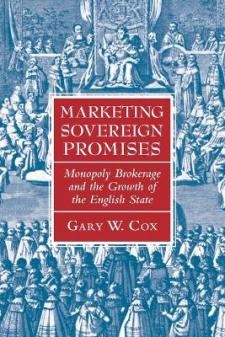 How did England, once a minor regional power, become a global hegemon between 1689 and 1815? Why, over the same period, did she become the world's first industrial nation? Gary W. Cox addresses these questions in Marketing Sovereign Promises. The book examines two central issues: the origins of the great taxing power of the modern state and how that power is made compatible with economic growth. Part I considers England's rise after the revolution of 1689, highlighting the establishment of annual budgets with shutdown reversions. This core reform effected a great increase in per capita tax extraction. Part II investigates the regional and global spread of British budgeting ideas. Cox argues that states grew only if they addressed a central credibility problem afflicting the Ancien Regime - that rulers were legally entitled to spend public revenue however they deemed fit.