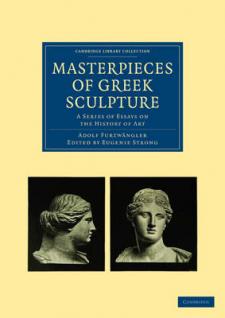 Adolf Furtwangler (1853-1907) was a prominent German archaeologist and art historian specialising in classical art. He was appointed assistant Director of the Koenigliche Museen zu Berlin in 1880, a position he held until 1894 when he was appointed professor of Classical Archaeology in Munich. He is best known for developing the Kopienkritik approach to studying Roman sculpture, which he introduces in this volume first published in 1885 and translated into English by Eugenie Strong in 1895. Kopienkritik is a methodology which assumes that Roman sculptures are copies of Greek originals, and that by studying the Roman copies the original Greek sculpture can be reconstructed. This approach dominated the study of classical sculpture in the twentieth century and remains influential despite repeated criticism. Furtwangler compares the styles of known classical Greek sculptors with Roman statues to uncover the original sculptor in this defining example of the Kopienkritic approach.