A Matter of Murder 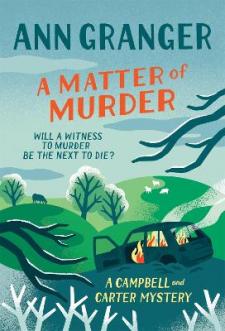 A MATTER OF MURDER is the seventh Cotswold village crime novel in Ann Granger's Campbell and Carter series. Sure to appeal to fans of Midsomer Murders and M. C. Beaton's Agatha Raisin mysteries.

Two years ago, Miff Ferguson chose to opt out of the rat race. Since then he's been living rough and happily so. That is until now. For, as the first signs of winter approach, everything changes. While looking for shelter, Miff stumbles across the dead body of a young woman inside a dilapidated warehouse. Quickly realising he's not alone, and what's worse he's been spotted, Miff becomes embroiled in a game of cat-and-mouse with a killer that forces him to abandon his life on the streets and take refuge with his aunt and uncle in the village of Weston St Ambrose. But, despite his best efforts to lie low, trouble seems to follow him and when another dead body is discovered at a local farm, it's clear Miff is not free from danger.

With the clock ticking, Inspector Jess Campbell and Superintendent Ian Carter must join forces once again with the team of police at Bamford to piece together the puzzle before another innocent life is lost...

'Characterisation, as ever with Granger, is sharp and astringent' The Times