Maurice Blanchot and the Literature of Transgression 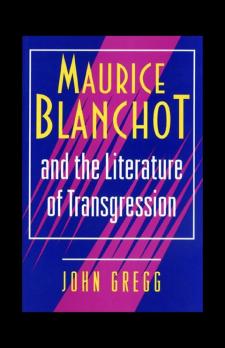 In this book, the first in English devoted exclusively to Maurice Blanchot, John Gregg examines the problematic interaction between the two forms of discourse, critical and fictional, that comprise this writer's hybrid oeuvre. The result is a lucid introduction to the thought of one of the most important figures on the French intellectual scene of the past half-century.Gregg organizes his discussion around the notion of transgression, which Blanchot himself took over from Georges Bataille--most palpably in his interpretation of the myth of Orpheus--as a paradigm capable of accounting for the relationships that exist in the textual economies formed by author, work, and reader. Chapters on the critical work address such issues as Blanchot's ambivalent attitude toward the speculative dialectic of Hegelianism, his thematization of literature's involvement with death, and the mythical and Biblical figures he uses to portray the acts of reading and writing. Gregg also performs extended close readings of two representative works of fiction, Le Tres-Haut and L'Attente l'oubli, in an effort to trace Blanchot's evolution as a creator of narratives and to ascertain how his fiction can be seen as constituting a mise en oeuvre of the concerns he treats in his criticism. The book concludes with an assessment of Blanchot's place in the recent history of French critical theory.