Media and Democracy in Africa 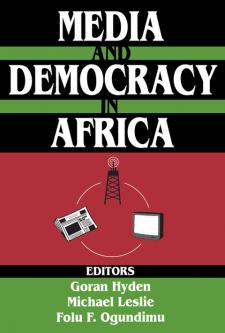 Recent discussion of democratization in Africa has focused primarily on the reform of formal state institutions: the public service, the judiciary, and the legislature. Similarly, both scholars and activists have shown interest in how associational life-and with it a civil society-might be enhanced in the countries of the African continent. Much less concern, however, has been directed to the communications media, although they form a vital part of this process. Media and Democracy in Africa provides the first comprehensive and up-to-date assessment of the role of the media in political change in sub-Saharan Africa. The central argument of the volume is that while the media may still be relatively weak compared to their positions in liberal democracies, they have come to play a much more important role than ever before since independence. Although they have not yet demonstrated sufficient effectiveness as public watchdogs and agenda setters, they have succeeded in creating new communicative spaces for people who have previously been intimidated or silent. Building on this the contributors argue that a different conceptualization of democratization than the mainstream currently uses may be necessary to capture the process in Africa where it is characterized by contestation rather than consolidation. This volume shows that the media scene in Africa is diverse. It stretches from the well-developed and technologically advanced situation in South Africa to the still fledgling media operations that are typical in sub-Saharan Africa. In these countries, print media as well as television and radio are just beginning to take their place in society and do so using simple and often outdated technology. The volume also examines how these growing outlets are supplemented by informal media, the so-called radio trottoir, or rumor mill whereby the autocratic and bureaucratic direction of public affairs are subject to private speculation and analysis. Media and Democracy in Africa is organized to provide a historical perspective on the evolution of the African media, placing the present in the context of the past, including both colonial and post-colonial experiences. It will be of interest to Africa area specialists, students of media and communications, political scientists and sociologists.