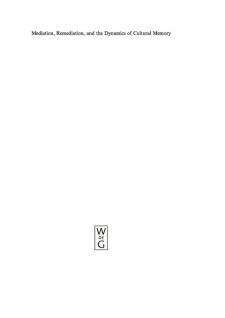 Mediation, Remediation, and the Dynamics of Cultural Memory

This collection of essays brings together two major new developments in cultural memory studies: firstly, the shift away from static models of cultural memory, where the emphasis lies on cultural products, in the direction of more dynamic models where the emphasis lies instead on the cultural and social processes involved in the ongoing production of shared views of the past; and secondly, the growing interest in the role of the media, and their role beyond that of mere storage, within these dynamics.
The specific concern of this collection is linking the use of media to the larger socio-cultural processes involved in collective memory-making. The focus rests in particular on two aspects of media use: the basic dynamics of “mediation” and “remediation”. The key questions are: What role do media play in the production and circulation of cultural memories? How do mediation, remediation and intermediality shape objects and acts of cultural remembrance? How can new, emergent media redefine or transform what is collectively remembered?
The essays of this collection focus on social, historical, religious, and artistic media-memories. The authors analyze the memory-making impact of news media, the mediation and remediation of lieux de mémoire, the medial representation of colonial and postcolonial, of Holocaust and Second World War memories, and finally the problematization of these very processes in artistic media forms, such as novels and movies.