The Men and Women We Want 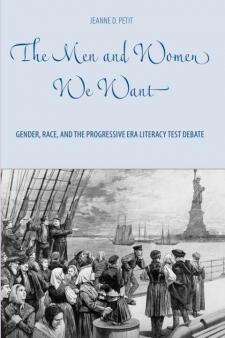 Should immigrants have to pass a literacy test in order to enter the United States? Progressive-Era Americans debated this question for more than twenty years, and by the time the literacy test becamelaw in 1917, the debate had transformed the way Americans understood immigration, and created the logic that shaped immigration restriction policies throughout the twentieth century.
Jeanne Petit argues that the literacy test debate was about much more than reading ability or the virtues of education. It also tapped into broader concerns about the relationship between gender, sexuality, race, and American national identity. The congressmen, reformers, journalists, and pundits who supported the literacy test hoped to stem the tide of southern and eastern European immigration. To make their case, these restrictionists portrayed illiterate immigrant men as dissipated, dependent paupers, immigrant women as brood mares who bore too many children, and both as a eugenic threat to the nation's racial stock. Opponents of the literacy test argued that the new immigrants were muscular, virile workers and nurturing, virtuous mothers who would strengthen the race and nation. Moreover, the debaters did not simply battle about what social reformer Grace Abbott called "the sort of men and women we want." They also defined as normative the men and women they were -- unquestionably white, unquestionably American, and unquestionably fit to shape the nation's future.