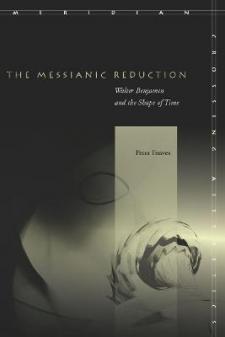 The Messianic Reduction is a groundbreaking study of Walter Benjamin's thought. Fenves places Benjamin's early writings in the context of contemporaneous philosophy, with particular attention to the work of Bergson, Cohen, Husserl, Frege, and Heidegger. By concentrating on a neglected dimension of Benjamin's friendship with Gershom Scholem, who was a student of mathematics before he became a scholar of Jewish mysticism, Fenves shows how mathematical research informs Benjamin's reflections on the problem of historical time. In order to capture the character of Benjamin's "entrance" into the phenomenological school, the book includes a thorough analysis of two early texts he wrote under the title of "The Rainbow," translated here for the first time. In its final chapters, the book works out Benjamin's deep and abiding engagement with Kantian critique, including Benjamin's discovery of the political counterpart to the categorical imperative in the idea of "pure violence."