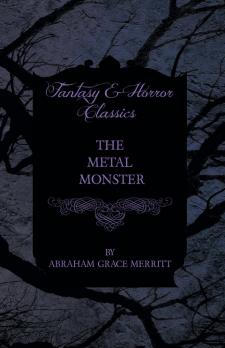 This early work by Abraham Grace Merritt was originally published in 1920 and we are now republishing it with a brand new introductory biography. 'The Metal Monster' is a fantasy novel about Dr. Goodwin's travels in the Himalayas and the mysterious metal beings he encounters there. It tells the tale of adventurous explorers who discover an unknown world. Abraham Grace Merritt - also known by his byline, A. Merritt - was born on the 20th January, 1884 in New Jersey, America. Merritt's stories typically revolved around conventional pulp magazine themes. His heroes are gallant Irishmen or Scandinavians, his villains treacherous Germans or Russians and his heroines often virginal, mysterious and scantily clad. Merritt married twice, once in the 1910s to Eleanore Ratcliffe, with whom he raised an adopted daughter, and again in the thirties to Eleanor H. Johnson.