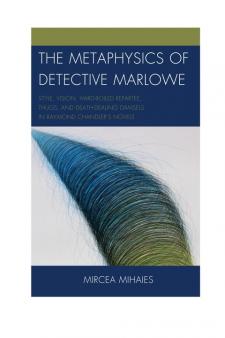 The Metaphysics of Detective Marlowe: Style, Vision, Hard-Boiled Repartee, Thugs, and Death-Dealing Damsels in Raymond Chandler's Novels is a comparative study of ';the life and times' of an American idol, Raymond Chandler's detective Philip Marlowe. It is a bitter-sweet critical exploration, meant to redefine the exceptional cultural profile, as well as the moral and social obsessions of one of America's eminent fictional heroes. The study paints a colorful picture of the irresistible blend of romantic blind faith and social, moral and political toughness which characterized the United States in the 1930s-40s, with the memorable throng of drug dealers, hit men, vamps, corrupt politicians, and eccentric millionaires that colonize Raymond Chandler's work. As the only defender of truth and honor in the Californian ';Waste Land,' Philip Marlowe emerges as a symbolic figure, celebrated for the unique place he holds in the American hard-boiled mythology. The volume comprises an Introduction, Marlowe Before Marlowe, and four large chapters, each focusing on the innovations and enduring strategies behind Chandler's persuasive vision: The Doughy Mass of Depravity, A Phantasm Called Style, The Villainy Septet and Marlowe After Marlowe.As presented in this book, Philip Marlowe is a sentimentalist of the worst type: one embarrassed to show his true feelings. He is tough, but not tough enough and, consequently, a charming loser, always defeated in his confrontations with psychopath monsters and the legions of death-dealing damsels. The Californian detective's gentleness and callousness are endearing: the gentleness is always callous, and the callousness is barely gentle. He seems to be the survivor of an extinct species, living for and by a code of honor. He believes in the purity of desires, expressed in a nascent idiom, a kind of secret/public language that heralds the resurrection of the new hard-boiled diction. His genuine candor is perfectly expressed in the directness of his talk, a brilliant example of rhetorical tightrope walking. Philip Marlowe embodies the contradictions of the problematic modernismhalf bedlam, half expressionismof his time and ours alike. The tradition he inaugurated is consistently illustrated today by James Ellroy, Allan Guthrie, Walter Mosley, Megan Abbott or Charlie Hudson.