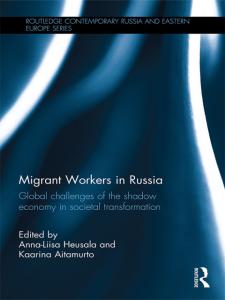 Russia has a very large pool of economic migrants, up to 25% of the workforce according to some estimates. Although many migrants, many from former Soviet countries which are now independent, entered Russia legally, they frequently face bureaucratic obstacles to legal employment and Russian citizenship, factors which have led to a very large “shadow economy”. This book presents a comprehensive examination of migrant labour in Russia. It describes the nature of migrant labour, explores the shadow economy and its unfortunate consequences, and discusses the rise of popular sentiment against migrants and the likely impact. The book also sets the Russian experiences of migrant labour in context, comparing the situation in Russia with that in other countries with significant migrant labour workforces.