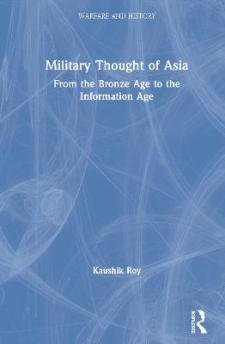 Military Thought of Asia challenges the assertion that the generation of rational secular ideas about the conduct of warfare is the preserve of the West, by analysing the history of ideas of warfare in Asia from the ancient period to the present.

The volume takes a transcontinental and comparative approach to provide a broad overview of the evolution of military thought in Asia. The military traditions and theories which have emerged in different parts of Eurasia throughout history are products of geopolitics and unique to the different regions. The book considers the systematic and tight representation of ideas by famous figures including Kautlya and Sun Tzu. At the same time, it also highlights publications on military affairs by small men like mid-ranking officers and scattered ideas regarding the origin, nature and societal impact of organised violence present in miscellaneous sources like coins, inscriptions, paintings and fictional literature. In so doing, the book fills a historiographical gap in scholarship on military thought, which marginalises Asia to the part of cameo, and historicises the evolution of theory and the praxis of warfare.

The volume shows that the 'East' has a long unbroken tradition of conceptualising war and its place in society from the Classical Era to the Information Age. It is essential reading for those interested in the evolution of military thought throughout history, particularly in Asia.