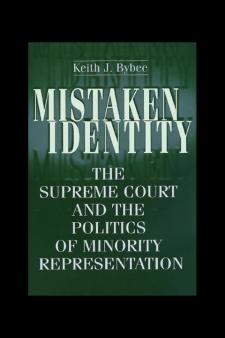 Is it ever legitimate to redraw electoral districts on the basis of race? In its long struggle with this question, the U.S. Supreme Court has treated race-conscious redistricting either as a requirement of political fairness or as an exercise in corrosive racial quotas. Cutting through these contradictory positions, Keith Bybee examines the theoretical foundations of the Court's decisions and the ideological controversy those decisions have engendered. He uncovers erroneous assumptions about political identity on both sides of the debate and formulates new terms on which minority representation can be pursued. As Bybee shows, the Court has for the last twenty years encouraged a division between individualist and group concepts of political identity. He demonstrates convincingly that both individualist and group proponents share the misguided notion that political identity is formed prior to and apart from politics itself. According to Bybee, this &quote;mistaken identity&quote; should be abandoned for a more flexible, politically informed understanding of who the &quote;people&quote; really are. Thus, a misdirected debate will be replaced by a more considered discussion in which the people can speak for themselves, even as the Court speaks on their behalf. Engaged in the politics of minority representation, the Court will be able to help citizens articulate and achieve more fruitful forms of political community.