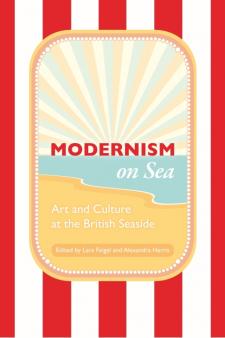 Modernism on Sea brings together writing by some of today’s most exciting seaside critics, curators, filmmakers and scholars, and takes the reader on a journey around the coast of Britain to explore the rich artistic and cultural heritage that can be found there, from St Ives to Scarborough. The authors consider avant-garde art, architecture, film, literature and music, from the early twentieth century to the present, setting the arrival of modernism against the background of seaside tradition.
From the cheeky postcards marvelled at by George Orwell to austere modernist buildings such as the De La Warr Pavilion; from the Camden Town Group’s sojourn in Brighton to John Piper’s ‘Nautical Style’; from Paul Nash’s surrealist benches on the promenade in Swanage to the influence of bunting and deckchairs on the Festival of Britain – Modernism on Sea is a sweeping tour de force which pays tribute to the role of the seaside in shaping British modernism.