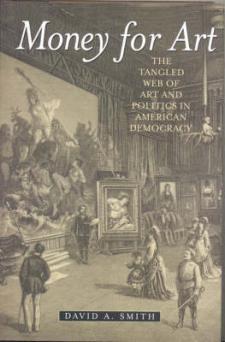 Government funding of the arts in America has never followed an easy course. Whether on a local or national scale, political support for the arts carries with it a sense of exchange-the expectation that in return for money the community will benefit. But this concept is fraught with potential difficulties that touch upon basic tensions between individual creativity and community standards. In Money for Art, David Smith traces the history of government funding of the arts in America, with emphasis on developments since the founding of the National Endowment of the Arts in 1965. Included with his narrative are examples of issues arising between individual artists and American cultural values at large in the last decades of the twentieth century. Art observers will recall the heated controversy of the late 1980s and early 1990s over the Endowment's involvement with the photographers Andres Serrano and Robert Mapplethorpe. The episode aptly represents the inevitable head-on collision of contemporary art with the politics of funding it. Mr. Smith uses this clash between funding and freedom of speech as a prism through which to view the broad disagreement in America over the meaning, purpose, and place of art in a democracy. Money for Art tells how this outlook evolved and what its consequences are for art in America.