From Morality to Metaphysics 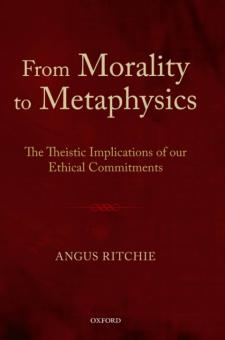 From Morality to Metaphysics offers an argument for the existence of God, based on our most fundamental moral beliefs. Angus Ritchie engages with a range of the most significant secular moral philosophers of our time, and argues that they all face a common difficulty which only theism can overcome. The book begins with a defence of the 'deliberative indispensability' of moral realism, arguing that the practical deliberation human beings engage in on a daily basis only makes sense if they take themselves to be aiming at an objective truth. Furthermore, when humans engage in practical deliberation, they necessarily take their processes of reasoning to have some ability to track the truth. Ritchie's central argument builds on this claim, to assert that only theism can adequately explain ourcapacity for knowledge of objective moral truths. He demonstrates that we need an explanation as well as a justification of these cognitive capacities. Evolutionary biology is not able to generate the kind of explanation which is required-and, in consequence, all secular philosophical accounts areforced either to abandon moral objectivism or to render the human capacity for moral knowledge inexplicable. This case is illustrated with discussions of a wide range of moral philosophers including Simon Blackburn, Thomas Scanlon, Philippa Foot, and John McDowell. Ritchie concludes by arguing that only purposive accounts of the universe (such as theism and Platonism) can account for human moral knowledge. Among such purposive accounts, From Morality to Metaphysics makes the case for theism as the most satisfying, intelligible explanation of our cognitive capacities.