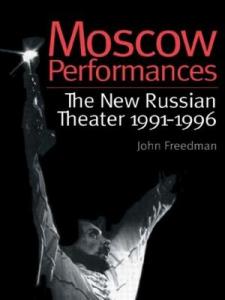 The reviews and features collected in John Freedman's Moscow Performances bring to life the diversity, energy, and imagination of Russian theater as few books have done before. While focusing on the work of Moscow's leading directors - Pyotr Fomenko, Kama Ginkas, Valery Fokin, Anatoly Vasilyev, Konstantin Raikin, Sergei Zhenovach, Yury Lyubimov, and many others - also included in its review are key productions by many of the renowned guests who bring their art to the Russian capital. Essays on St. Petersburg's Lev Dodin (of the Maly Drama Theatre), Lithuania's Eimuntas Nekrosius, Georgia's Robert Sturua, and Germany's Peter Stein confirm that Moscow's position as a "theatrical mecca" has not diminished since Anatoly Lunacharsky coined the phrase in the 1920s.
In addition to recording Freedman's immediate and opinionated responses to Moscow stage developments in the 1990s, Moscow Performances contains a wealth of information about the struggles and occasional triumphs of a new generation of talented but as yet unknown playwrights, the successes of the best actors, and the social and financial trends which have had such an impact on Russian theatre in the post-Soviet period.