Multilingualism and the Harmonisation of European Law 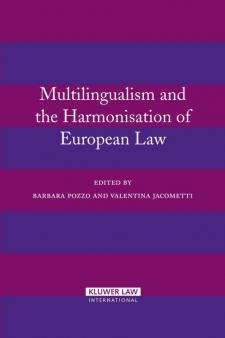 As European lawyers dealing with cross-border issues quickly learn, the terms
contract, contrat, and contratto signify three very different legal concepts.
This illustration highlights the importance of studying the relationships
between language and law, particularly in the context of strong pressure from
the European Community to harmonise the laws of the Member States a process
which appears difficult, if not impossible, unless there is an understanding
of the profound differences which exist between the various legal systems, and
the development of a common European legal language from the 21 official
languages now a feature of the European Union.

This admirable collection of essays brings together the work of practitioners
and scholars in three fields pertinent to this endeavour: representatives of
Community institutions who are involved in drafting, translating, and
interpreting multilingual texts; jurists and comparative lawyers from both
civil law and common law systems; and researchers in linguistics and language
issues. Among the many relevant matters they discuss are the following:

The essays were originally presented as papers at a conference held in Como in
April 2005, organised by the Faculty of Law of the University of Insubria
together with the Centro Interuniversitario di Ricerca in Diritto Comparato
(Interuniversity Centre for Research in Comparative Law) set up by the
Universities of Milan, Bologna and Insubria. This event took place in the
context of a research project co-financed by the University of Insubria and
the Italian Ministry of Education, University and Research. The particular
objective of the conference was to make a comparison between the day-to-day
working requirements within the Community institutions, each with its own
particular needs, and the longer-term analysis which the academic world could
bring to bear on the problems of the translatability of legal terms.

As the first in-depth appraisal of this crucial matter, this book cannot fail
to find interested readers among all the branches of European law,
practitioners and scholars, local and international. It is sure to be a highly
valuable resource for many years to come.