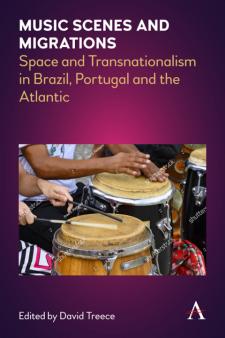 ‘Music Scenes and Migrations’ brings together new work from Brazilian and European scholars around the themes of musical place and transnationalism across the Atlantic triangle connecting Brazil, Africa and Europe. Moving beyond now-contested models for conceptualizing international musical relations and hierarchies of powers and influence, such as global/local or centre/periphery, the volume draws attention instead to the role of the city, in particular, in producing, signifying and mediating music-making in the colonial and post-colonial Portuguese-speaking world. In considering the roles played by cities as hubs of cultural intersection, socialization, exchange and transformation; as sites of political intervention and contestation; and as homes to large concentrations of consumers, technologies and media, Rio de Janeiro necessarily figures prominently, given its historical importance as an international port at the centre of the Lusophone Atlantic world. The volume also gives attention to other urban centres, within Brazil and abroad, towards which musicians and musical traditions have migrated and converged – such as São Paulo, Lisbon and Madrid – where they have reinvented themselves; where notions of Brazilian and Lusophone identity have been reconfigured; and where independent, peripheral and underground scenes have contested the hegemony of the musical ‘mainstream’.

The contributions to the volume are grouped according to three key thematic areas. ‘Colonial and Post-Colonial Transnationalisms, Migrations and Diasporas’ focuses on the musical movements and fluxes that have traversed the Atlantic world since the colonial period, including the diasporic extensions of African music-making; the role of early forms of mechanical music-recording in mediating between Portuguese and Brazilian popular songs in nineteenth-century Rio de Janeiro; the story of música caipira in articulating the ‘rooting’ and ‘uprooting’ migratory experience of the São Paulo peasantry in the twentieth century; and the contemporary phenomenon of Brazilian musicians living in the cities of Lisbon and Madrid, where they negotiate the needs and expectations of their expatriate communities, tourists and local audiences.

‘Relocating Rio de Janeiro’ considers how, in its identification with key musical traditions such as samba, pagode and choro, the city has been a contested space – geographically, symbolically and politically – whether in the memories and mythologies of key neighbourhoods and locations of music-making as expressed in the musical discourses themselves, through music’s involvement in the material forms of community life and popular culture, including religion, carnival and other festivals, or through the competing claims of official state institutions and policies, the recording industry and grassroots communitarian initiatives.

The essays in ‘Demetropolitanizing the Musical City: Other Scenes, Industries, Technologies’ explore how contemporary developments in the independent, underground and peripheral music scenes in Brazil and Portugal have challenged traditional narratives and hierarchies that dichotomized the field in terms of national tradition v. internationalism, mainstream v. margins, pop v. popular. Genres such as sertaneja universitária, funk, heavy metal, Brazilian jazz and instrumental music, post-Vanguarda Paulista MPB and rap are considered in the light of profound shifts in the economy and technology of the music industry, including fluctuations in the recording sector, the internationalization of audiences, and the rise of YouTube, among other video-based digital platforms, as a predominant medium for the consumption of music.