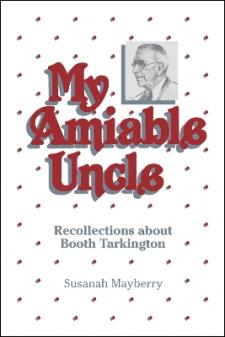 He was twice the winner of the Pulitzer Prize in fiction: in 1919 for The Magnificent Ambersons and in 1922 for Alice Adams. His play Clarence launched Alfred Lunt on his distinguished career and provided Helen Hayes with an early successful role. His Penrod books continued the American boy-story tradition which started with the works of Mark Twain. Early in this century, through his novel The Turmoil, he warned of sacrificing the environment to industrial growth. Yet, since his death in 1946, Booth Tarkington-this writer from the Midwest who accomplished so much-has faded from the memory of the reading public, and many of his works are out of print.

But his memory is fresh and vivid in the mind of his grandniece Susanah Mayberry, and her recollections of him leap from the pages of her book. She recalls that as a small child, before she was aware of her uncle's fame as a writer, he emerged as the one figure whose outline was clear among the blur of forms that made up her large family.

"No one who met Booth Tarkington ever forgot him," says his great-niece. So, she introduces the reader to this multifaceted individual: the young man-about-town, the prankster, the writer of humorous letters (who drew caricatures in the margins), the bereaved father, the inspiration of the affection of three women (simultaneously), and the lover and collector of art objects and portraits.

The author of this volume draws primarily upon her own personal experiences, family lore, and letters (some never published before) to portray her amiable uncle. She tells of the pleasure it gave him to entertain his young nephews and nieces at his Tudor-style winter home in Indianapolis - where they played a spirited form of charades. She recalls vacations which she, as a college student, spent at his light-filled summer home in Kennebunkport, Maine - where she met his famous neighbors. During all of those times, Uncle Booth was the keen observer of youth, who created Penrod and friends from his observations, and the teacher o f youth, who transmitted his own love of art to his young relations. While recapturing memories of the unforgettable Tarkington, Mayberry recreates an era of elegant and leisurely living, when on the dining table "in the fingerbowls . . . were nosegays of sweet peas and lemon verbena or geranium leaves."

Susanah Mayberry shares with the reader a treasure of family photographs including Tarkington at various ages; interiors and exteriors of his homes; her father and uncles as children (the models of Penrod); the writer's indomitable sister who championed his early work; and his devoted second wife, a "gentle dragon," who kept his day-to-day life running smoothly.

Indiana residents will feel "at home" with the frequent references to the state and its people. Indianapolis of the late nineteenth through the mid-twentieth centuries influenced Tarkington and his work. The city was his birthplace and his death place. He spent a year at Purdue University where he met such "brilliancies" as George Ade and John McCutcheon. Other famous and not-so-famous Hoosiers became a part of Tarkington's life, and they-along with international literary, theatrical, and political luminaries-reappear in Susanah Mayberry's recollections of her amiable uncle.