"This Is My Reservation, I Belong Here" 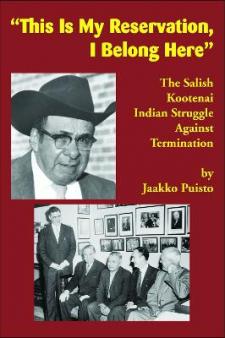 In the 1950s, the Confederated Salish and Kootenai Tribes were high on the list of Indian tribes to be terminated as a tribal and Native community. Jaakko Puisto's history describes the struggle of the Confederated Salish and Kootenai Tribes to avoid congressional termination of the Flathead Indian Reservation in western Montana. He tells of the debate within the tribes and their work to build political and public support. With the help of the Montana congressional delegation, the bill to terminate the reservation was defeated.

Puisto compares the experience of the Confederated Salish and Kootenai Tribes with that of other tribes, such as the Klamath and the Menominee Indians, who were terminated in the 1950s. Termination proved to be a disaster for the tribes who experienced it.