My Season on the Kenai 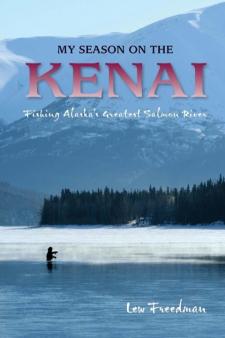 The Kenai is a world-class salmon river that attracts fishermen from all over the world, but is also the “everyman” river of the great fishing paradise of Alaska because of its accessibility.

The Kenai River is special not only because world-record salmon are caught in its stunning green waters, but because it is on the road system and thus can be accessed by the average fisherman, not merely the well-to-do who pay huge sums to fish in remote Alaskan areas controlled by private lodges and that are approachable only by small planes.

In a state that takes at least a share of its identity from its image as The Last Frontier and concurrently as a fishing haven, the Kenai River is the lifeblood of a sporting world and industry that offers an incomparable fishing experience to the resident, the tourist, the hardcore fisherman, the beginner, and the expert.

Fishermen in the Lower 48 states, seduced by images of gigantic fighting salmon, dream of some day fishing the picturesque waters of the Kenai River. Fishermen who live in Southcentral Alaska, including Alaska's largest city of Anchorage, plot their fishing seasons around the arrival of king salmon, red salmon, and silver salmon. To all of them, the Kenai is a magical river.
Not only is it the place of dreams, where an angler might catch a world record or world-class fish, it is, despite its nearness to the small cities of Kenai and Soldotna, still a wilderness. At one bend in the river there might be a hotel, a private summer home, or a forest since the Kenai National Wildlife Refuge also swallows the Kenai River.

Each summer thousands of anglers fish the Kenai River. They bring millions of dollars worth of business to the Kenai Peninsula while following their dreams and bringing home stories of wilderness fishing adventures.