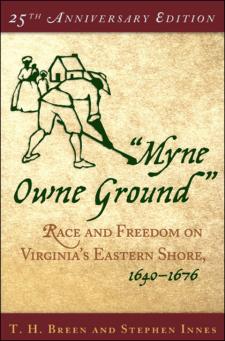 Ever since its publication twenty-five years ago, Myne Owne Ground has challenged readers to rethink much of what is taken for granted about American race relations. During the earliest decades of Virginia history, some men and women who arrived in the New World as slaves achieved freedom and formed a stable community on the Eastern shore. Holding their own with white neighbors for much of the 17th century, these free blacks purchased freedom for family members, amassed property, established plantations, and acquired laborers. T.H. Breen and Stephen Innes reconstruct a community in which ownership of property was as significant as skin color in structuring social relations. Why this model of social interaction in race relations did not survive makes this a critical and urgent work of history. In a new foreword, Breen and Innes reflect on the origins of this book, setting it into the context of Atlantic and particularly African history.