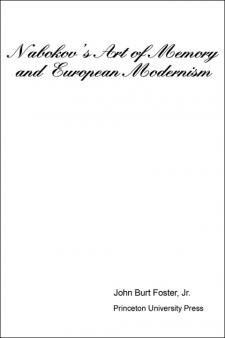 Despite Vladimir Nabokov's hostility toward literary labels, he clearly recognized his own place in cultural history. In a fresh approach stressing Nabokov's European context, John Foster shows how this writer's art of memory intersects with early twentieth-century modernism. Tracing his interests in temporal perspective and the mnemonic image, in intertextual &quote;reminiscences,&quote; and in individuality amid cultural multiplicity, the book begins with such early Russian novels as Mary, then treats his emerging art of memory from Laughter in the Dark to The Gift. After discussing the author's cultural repositioning in his first English novels, Foster turns to Nabokov's masterpiece as an artist of memory, the autobiography Speak, Memory, and ends with an epilogue on Pale Fire.As a cross-cultural overview of modernism, this book examines how Nabokov navigated among Proust and Bergson, Freud and Mann, and Joyce and Eliot. It also explores his response to Baudelaire and Nietzsche as theorists of modernity, and his sense of Dostoevsky, Tolstoy, and Pushkin as modernist precursors. As an approach to Nabokov, the book reflects the heightened importance of autobiography in current literary study. Other critical issues addressed include Bakhtin's theory of intertextuality, deconstructive views of memory, Benjamin's modernism of memory, and Nabokov's assumptions about modernism as a concept.