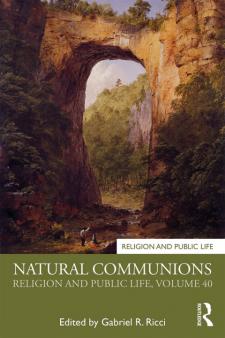 The academic treatment of the environment and nature, since the 1980s, has been formalized in sub-disciplines like environmental history, environmental philosophy, ecocriticism, and eco-spirituality. Within these disciplines the concept of nature has been variously employed to reorient humanity to a holistic moral standard. In each case there is general consensus that inquiry ought to turn on moral considerations of the interaction of humans and the environment; with implied admonitions to live sustainably. Lending credence to the Earth as a superorganism in its own right, these modern ecological expressions can be traced to Rachel Carson's revelations in Silent Spring. However, they have a long pre-history which appears in monistic philosophy, the spirit of Deism, in both Romanticism and the Enlightenment, and in political expressions of the idea of Nature's God, designed to promote a secular vision of the state and to overturn predatory religious rivalries. With this literary momentum, Natural Communions, volume 40 of Religion and Public Life, gathers interdisciplinary essays which reconfigure humanity within an ecotheological anthropology and which treat the idea of the sacred from the perspective of an Earth-centered spirituality, thus redefining humanity's response to ecological challenges and initiating a new status within a more expansive cosmology complete with a naturalized conception of Divine Reality.