The Natural History and Antiquities of Selborne, in the County of Southampton 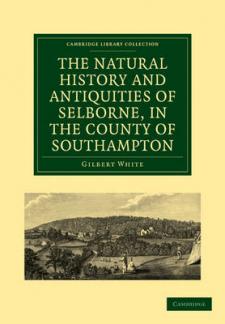 Gilbert White (1720-1793) published his Natural History and Antiquities as one volume in 1789. Both works consist of a series of letters written by White to the barrister Daines Barrington (1727-1800) and the zoologist Thomas Pennant (1726-1798). The letters in Natural History, White's best-known work, contain detailed information about his observations of local flora, fauna and wildlife. White was a pioneer of the study of birds and animals in their natural habitats, rather than as specimens removed from their environments. His methods of observation enabled him to identify and record many previously unknown species. (He was the first, for example, to distinguish the chiffchaff from the warbler by differences in song.) The letters in Antiquities are concerned with the topographical, social and ancient history of Selborne. They include details of important Roman coin finds and are an indispensable source for the history of local churches and buildings.