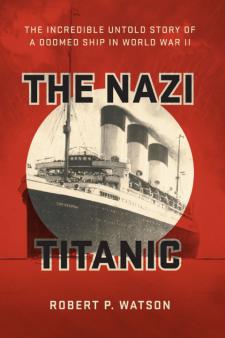 Built in 1927, the German ocean liner SS Cap Arcona was the greatest ship since the RMS Titanic and one of the most celebrated luxury liners in the world. When the Nazis seized control in Germany, she was stripped down for use as a floating barracks and troop transport. Later, during the war, Hitler's minister, Joseph Goebbels, cast her as the "star" in his epic propaganda film about the sinking of the legendary Titanic. Following the film's enormous failure, the German navy used the Cap Arcona to transport German soldiers and civilians across the Baltic, away from the Red Army's advance. In the Third Reich's final days, the ill-fated ship was packed with thousands of concentration camp prisoners. Without adequate water, food, or sanitary facilities, the prisoners suffered as they waited for the end of the war. Just days before Germany surrendered, the Cap Arcona was mistakenly bombed by the British Royal Air Force, and nearly all of the prisoners were killed in the last major tragedy of the Holocaust and one of history's worst maritime disasters. Although the British government sealed many documents pertaining to the ship's sinking, Robert P. Watson has unearthed forgotten records, conducted many interviews, and used over 100 sources, including diaries and oral histories, to expose this story. As a result, The Nazi Titanic is a riveting and astonishing account of an enigmatic ship that played a devastating role in World War II and the Holocaust.