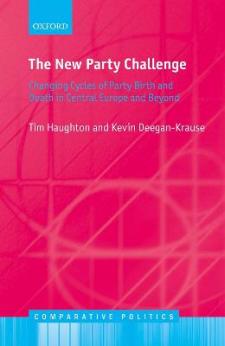 Why do some parties live fast and die young, but other endure? And why are some party systems more stable than others? Based on a blend of data derived from both qualitative and quantitative sources, The New Party Challenge develops new tools for mapping and measuring party systems, and develops conceptual frameworks to analyse the dynamics of party politics, particularly the birth and death of parties. In addition to highlighting the importance of agency
and choice in explaining the fate of parties, the book underlines the salience of the clean versus corrupt dimension of politics, charts the flow of voters in the new party subsystem, and emphasizes the dimension of time and its role in shaping developments. The New Party Challenge not only provides the first
systematic book length study of political parties across Central Europe in the three decades since the 1989 revolutions, charting and explaining the patterns of politics in that region, it also highlights that similar processes are at play on a far wider geographical canvas. The book concludes by reflecting on what the dynamics of party politics, especially the emergence of so many new parties, means for the health and quality of democracy, and what could and should be done.