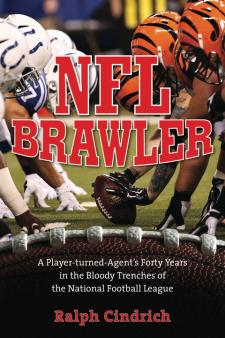 NFL Brawler is a raucous first-person account of an NFL under siege by the game’s first player-turned-agent, Ralph Cindrich, the original “Blind Side” agent whose entertaining pro football memoir takes readers behind the scenes of the game’s most important and outrageous drafts, deals, and trades; takes on NFL scandals by tellin’ it like it is; and takes readers closer to the real action of the sport—from locker rooms to boardrooms, and into the worlds of agents and players—than any book to date. Chronicling more than thirty years in the professional football business—on the field and in the locker room; in high-stakes negotiations with coaches, GMs, and owners; and inside agents’ and players’ personal lives—Cindrich, twice named by The Sporting News as one of the 100 most powerful people in sports, writes about a who’s who of professional football: NFL coaches like Bill Parcells, Jimmy Johnson, Mike Ditka, Sid Gillman, and Bill Belichick; NFL owners like Art Rooney and Al Davis to Jerry Jones and others; other sports agents; and the NFL talking heads from John Madden to Keyshawn Johnson. While taking certain aspects of his beloved sport to task, Cindrich’s memoir is entertaining—blowing out of the water Jerry Maguire, Arli$$, and other portrayals of an agent’s life.