No Sense of Decency 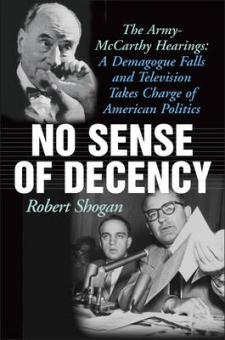 "Have you no sense of decency, sir?" asked attorney Robert Welch in a climactic moment in the 1954 Senate hearings that pitted Joseph R. McCarthy against the United States Army, President Dwight Eisenhower, and the rest of the political establishment. What made the confrontation unprecedented and magnified its impact was its gavel-to-gavel coverage by television. Thirty-six days of hearings transfixed the nation. With a journalist's eye for revealing detail, Robert Shogan traces the phenomenon and analyzes television's impact on government. Despite McCarthy's fall, Mr. Shogan points out, the hearings left a major item of unfinished business-the issue of McCarthyism, the strategy based on fear, smear, and guilt by association.