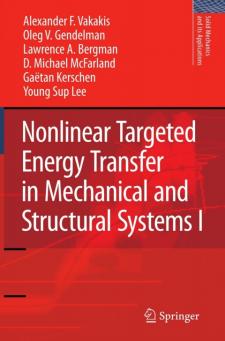 This monograph evolved over a period of nine years from a series of papers and presentations addressing the subject of passive vibration control of mechanical s- tems subjected to broadband, transient inputs. The unifying theme is Targeted - ergy Transfer – TET, which represents a new and unique approach to the passive control problem, in which a strongly nonlinear, fully passive, local attachment, the Nonlinear Energy Sink – NES, is employed to drastically alter the dynamics of the primary system to which it is attached. The intrinsic capacity of the properly - signed NES to promote rapid localization of externally applied (narrowband) - bration or (broadband) shock energy to itself, where it can be captured and dis- pated, provides a powerful strategy for vibration control and the opens the pos- bility for a wide range of applications of TET, such as, vibration and shock i- lation, passive energy harvesting, aeroelastic instability (?utter) suppression, se- mic mitigation, vortex shedding control, enhanced reliability designs (for ex- ple in power grids) and others. The monograph is intended to provide a thorough explanation of the analytical, computational and experimental methods needed to formulate and study TET in mechanical and structural systems. Several prac- cal engineering applications are examined in detail, and experimental veri?cation and validation of the theoretical predictions are provided as well. The authors also suggest a number of possible future applications where application of TET seems promising. The authors are indebted to a number of sponsoring agencies.