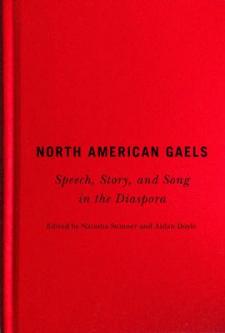 A mere 150 years ago Scottish Gaelic was the third most widely spoken language in Canada, and Irish was spoken by hundreds of thousands of people in the United States. A new awareness of the large North American Gaelic diaspora, long overlooked by historians, folklorists, and literary scholars, has emerged in recent decades. North American Gaels, representing the first tandem exploration of these related migrant ethnic groups, examines the myriad ways Gaelic-speaking immigrants from marginalized societies have negotiated cultural spaces for themselves in their new homeland. In the macaronic verses of a Newfoundland fisherman, the pointed addresses of an Ontario essayist, the compositions of a Montana miner, and lively exchanges in newspapers from Cape Breton to Boston to New York, these groups proclaim their presence in vibrant traditional modes fluently adapted to suit North American climes. Through careful investigations of this diasporic Gaelic narrative and its context, from the mid-eighteenth century to the twenty-first, the book treats such overarching themes as the sociolinguistics of minority languages, connection with one's former home, and the tension between the desire for modernity and the enduring influence of tradition. Staking a claim for Gaelic studies on this continent, North American Gaels shines new light on the ways Irish and Scottish Gaels have left an enduring mark through speech, story, and song.