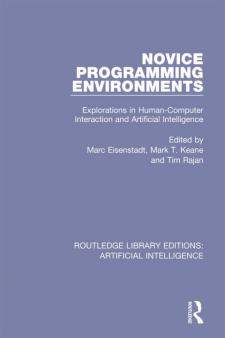 This book, originally published in 1992, encapsulates ten years of research at the Open University’s Human Cognition Research Laboratory. The research investigates the problems of novice programmers, and is strongly oriented toward the design and implementation of "programming environments" aimed at eliminating or easing novices’ problems. A range of languages is studied: Pascal, SOLO, Lisp, Prolog and "Knowledge Engineering Programming". The primary emphasis of the empirical studies is to gain some understanding of novices’ "mental models" of the inner workings of computers. Such (erroneous) models are constructed by novices in their own heads to account for the idiosyncrasies of particular programming languages. The primary emphasis of the implementations described in the book is the provision of "automatic debugging aids", i.e. artificial intelligence programs which can analyse novices’ buggy programs, and make sense of them, thereby providing useful advice for the novices. Another related strand taken in some of the work is the concept of "pre-emptive design", i.e. the provision of tools such as syntax-directed editors and graphical tracers which help programmers avoid many frequently-occurring errors. A common thread throughout the book is its Cognitive Science/Artificial Intelligence orientation. AI tools are used, for instance, to construct simulation models of subjects writing programs, in order to provide insights into what their deep conceptual errors are. At the other extreme, AI programs which were developed in order to help student debug their programs are observed empirically in order to ensure that they provide facilities actually needed by real programmers. This book will be of great interest to advanced undergraduate, postgraduate, and professional researchers in Cognitive Science, Artificial Intelligence, and Human-Computer Interaction.