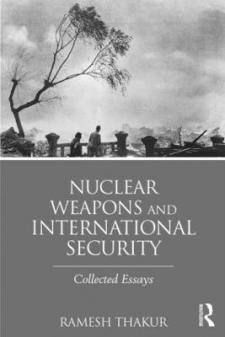 This volume brings together more than three decades of research and writings by Professor Ramesh Thakur on the challenges posed by nuclear weapons.

Following an introduction to the current nuclear state of play, the book addresses the challenge of nuclear weapons in three parts. Part I describes the scholar-practitioner interface in trying to come to grips with this challenge, the main policy impact on security strategy, and the various future nuclear scenarios. Part II addresses regional nuclear challenges from the South Pacific to East, South and West Asia and thereby highlights serious deficiencies in the normative architecture of the nuclear arms control and disarmament regime. In the third and final part, the chapters discuss regional nuclear-weapon-free zones, NPT anomalies (and their implications for the future of the nuclear arms control regime) and, finally, assess the global governance architecture of nuclear security in light of the three Nuclear Security Summits between 2010 and 2014. The concluding chapter argues for moving towards a world of progressively reduced nuclear weapons in numbers, reduced salience of nuclear weapons in national security doctrines and deployments, and, ultimately, a denuclearized world.

This book will be of much interest to students of nuclear proliferation, global governance, international organisations, diplomacy and security studies.