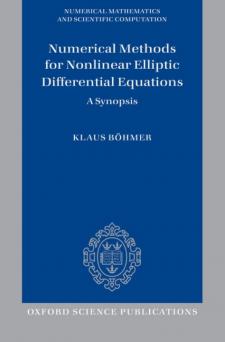 Nonlinear elliptic problems play an increasingly important role in mathematics, science and engineering, creating an exciting interplay between the subjects. This is the first and only book to prove in a systematic and unifying way, stability, convergence and computing results for the different numerical methods for nonlinear elliptic problems. The proofs use linearization, compact perturbation of the coercive principal parts, or monotone operator techniques, andapproximation theory. Examples are given for linear to fully nonlinear problems (highest derivatives occur nonlinearly) and for the most important space discretization methods: conforming and nonconforming finite element, discontinuous Galerkin, finite difference, wavelet (and, in a volume to follow,spectral and meshfree) methods. A number of specific long open problems are solved here: numerical methods for fully nonlinear elliptic problems, wavelet and meshfree methods for nonlinear problems, and more general nonlinear boundary conditions. We apply it to all these problems and methods, in particular to eigenvalues, monotone operators, quadrature approximations, and Newton methods. Adaptivity is discussed for finite element and wavelet methods. The book has been written for graduate students and scientists who want to study and to numerically analyze nonlinear elliptic differential equations in Mathematics, Science and Engineering. It can be used as material for graduate courses or advanced seminars.