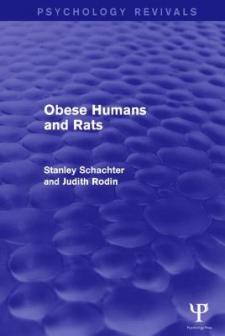 Originally published in 1974, this volume examines the behavioural similarities of obese humans and animals whose so-called feeding centre (the ventro-medial hypothalamic nuclei) has been lesioned. Both the obese human and the VMH-lesioned animal seem to share a hyposensitivity to the internal (physiological) cues to eating and hypersensitivity to external cues associated with food. Beginning with a review, these obese animals and the human obese are compared point by point on experimental results reported in the literature. Then, new findings are presented that specifically tested humans for relationships that are well-established for lesioned animals. Next, a theoretical framework integrates the human and animal data to postulate that the relationship of cue prominence and probability of response is stronger for the obese than for normal. The causes for this, and the extension of the basis for the obese's eating behaviour to other areas, are discussed in light of further experiments that will make this invaluable reading for all concerned with the history of obesity and the issues of regulatory behaviour.