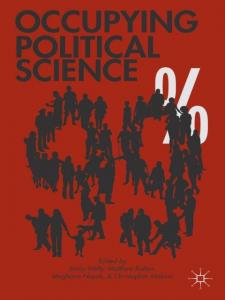 Occupying Political Science is a collection of critical essays by New York based scholars, researchers, and activists, which takes an unconventional look at the Occupy Wall Street movement through concepts found in the field of political science. Both normative and descriptive in its approach, Occupying Political Science seeks to understand not only the origins, logic, and prospects of the OWS movement, but also its effect on political institutions, activism, and the very way we analyze power. It does so by asking questions such as: How does OWS make us rethink the discipline of political science, and how might the political science discipline offer ways to understand and illuminate aspects of OWS? How does social location influence OWS, our efforts to understand it, and the social science that we do? Through addressing topics including social movements and non-violent resistance, surveillance and means of social control, electoral arrangements, new social media and technology, and global connections, the authors offer a unique approach that takes seriously the implications of their physical, social and disciplinary location, in New York, both in relation to Occupy Wall Street, and in their role as scholars in political science.