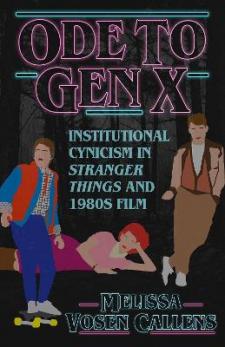 Even for the casual viewer, the Netflix series Stranger Things will likely feel familiar, reminiscent of popular 1980s coming-of-age movies such as The Goonies, E.T. the Extra-Terrestrial, and Stand by Me. Throughout the series, nods to each movie are abundant. While Stranger Things and these classic 1980s films are all tales of childhood friendship and shared adventures, they are also narratives that reflect and shape the burgeoning cynicism of the 1980s.

In Ode to Gen X: Institutional Cynicism in ""Stranger Things"" and 1980s Film, author Melissa Vosen Callens explores the parallels between iconic films featuring children and teenagers and the first three seasons of Stranger Things, a series about a group of young friends set in 1980s Indiana. The text moves beyond the (at times) non-sequitur 1980s Easter eggs to a common underlying narrative: Generation X's growing distrust in American institutions.