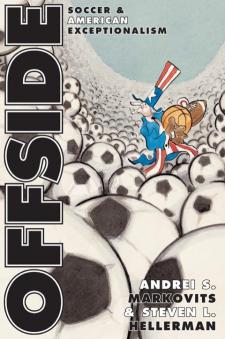 Soccer is the world's favorite pastime, a passion for billions around the globe. In the United States, however, the sport is a distant also-ran behind football, baseball, basketball, and hockey. Why is America an exception? And why, despite America's leading role in popular culture, does most of the world ignore American sports in return? Offside is the first book to explain these peculiarities, taking us on a thoughtful and engaging tour of America's sports culture and connecting it with other fundamental American exceptionalisms. In so doing, it offers a comparative analysis of sports cultures in the industrial societies of North America and Europe. The authors argue that when sports culture developed in the late nineteenth and early twentieth centuries, nativism and nationalism were shaping a distinctly American self-image that clashed with the non-American sport of soccer. Baseball and football crowded out the game. Then poor leadership, among other factors, prevented soccer from competing with basketball and hockey as they grew. By the 1920s, the United States was contentedly isolated from what was fast becoming an international obsession. The book compares soccer's American history to that of the major sports that did catch on. It covers recent developments, including the hoopla surrounding the 1994 soccer World Cup in America, the creation of yet another professional soccer league, and American women's global preeminence in the sport. It concludes by considering the impact of soccer's growing popularity as a recreation, and what the future of sports culture in the country might say about U.S. exceptionalism in general.