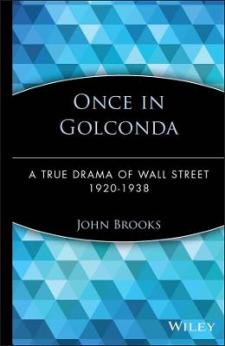 The 1920s and 1930s constituted an unforgettable epoch in Wall Street history. Brooks outlines the metaphor of the era's financial boom and bust: "Golconda, now a ruin, was a city in south-eastern India where, according to legend, everyone got rich ...a similar legend attached to Wall Street between the wars." He explores the creation and destruction of wealth in the life of Richard Whitney, the president of the New York Stock Exchange, whose own story runs parallel to the undulations of the stock market itself. It also examines the drama, ruthlessness, greed, and fantasy of the 1920s and 1930s that changed Wall Street forever. From the securities law governing the modern markets to the quixotic visions of the bullish investor, the book chronicles the timeless themes of Wall Street.