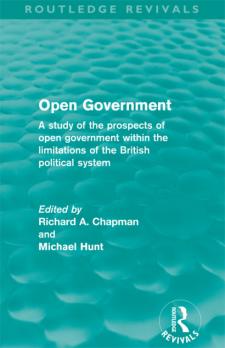 First published in 1987 this book considers the practical implications of increasing public access to official information in Britain, both from the perspective of increasing Freedom of Information and reforming Section 2 of the Official Secrets Act. It draws attention to the practical problems such changes would pose for both politicians and civil servants working in an adversarial system of government. It examines the effects of proposed changes on the conventions which are a fundamental feature of the British constitution. It also considers the political significance of reforms, both to demands for increased public participation in policy-making and to actual policies. Local and international perspectives on open government are included in order to provide an informed insight into an important issue of contemporary concern.