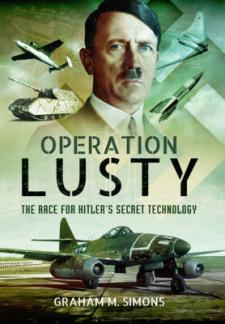 Graham Simons has been granted access to a staggering archive; a wealth of fascinating documentation that has never before seen the light of day. Category 1, top secret documents, prepared by the Director of Technical Services at Wright Field in 1945, feature lists of aircraft, radar equipment, and other military and aviation accessories that the United States and the Allies lusted after in the dying days of The Second World War and during the post-War period, when enemy secrets were more hungrily sought than ever. Details of information gleaned over the course of Operation LUSTY (LUftwaffe Secret TechnologY) are included in the form of reports, tables, and typed transcripts of conversations. Photographs also feature in this visual publication that seeks to consolidate all the various scraps of documentation filed around this time in an effort to create an authentic impression of events as they unfolded during the course of this mammoth retrieval operation.