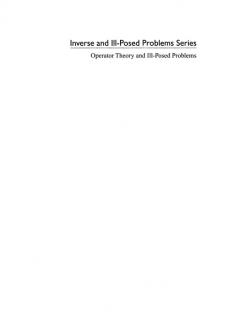 This book consists of three major parts. The first two parts deal with general mathematical concepts and certain areas of operator theory. The third part is devoted to ill-posed problems. It can be read independently of the first two parts and presents a good example of applying the methods of calculus and functional analysis. The first part &quote;Basic Concepts&quote; briefly introduces the language of set theory and concepts of abstract, linear and multilinear algebra. Also introduced are the language of topology and fundamental concepts of calculus: the limit, the differential, and the integral. A special section is devoted to analysis on manifolds. The second part &quote;Operators&quote; describes the most important function spaces and operator classes for both linear and nonlinear operators. Different kinds of generalized functions and their transformations are considered. Elements of the theory of linear operators are presented. Spectral theory is given a special focus. The third part &quote;Ill-Posed Problems&quote; is devoted to problems of mathematical physics, integral and operator equations, evolution equations and problems of integral geometry. It also deals with problems of analytic continuation. Detailed coverage of the subjects and numerous examples and exercises make it possible to use the book as a textbook on some areas of calculus and functional analysis. It can also be used as a reference textbook because of the extensive scope and detailed references with comments.