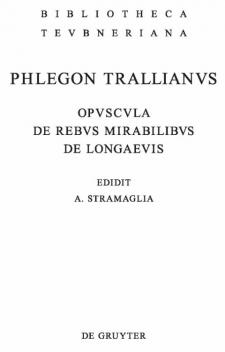 Phlegon of Tralles, a learned freedman of Hadrian's, was a prolific writer, but only two of his works have - though not entirely - survived: Peri thaumasion ('On marvellous things') and Peri makrobion ('On long-lived persons'). The former is probably the main extant paradoxographic collection from classical antiquity, mostly famous for some memorable ghost stories (one of which inspired Goethe); the latter reviews long-lived individuals from both archival and literary sources. Both are extensively interespersed with oracles, Sibylline and others. These works were hitherto available in unsatisfactory editions. Stramaglia's new edition relies on a fresh, meticulous collation of the codex unicus (Heidelberg, Palat. Gr. 398); takes complete account of scholarship from the editio princeps (1568) onwards; establishes the text according to a sounder evaluation of Phlegon's language and style; and includes not only a detailed apparatus criticus, but also - for the first time - an apparatus auxiliarius providing loci similes vel paralleli, as well as close bibliographical references and elucidations of obscure or abstruse passages.