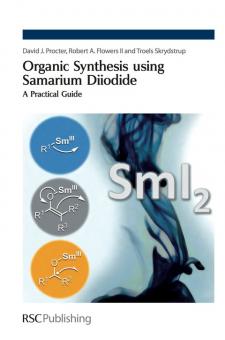 Samarium diiodide is one of the most important reducing agents available to synthetic organic chemists. The lanthanide(II) reagent acts by single-electron transfer to organic substrates leading to the formation of both radical and/or anionic intermediates. The power of the reagent arises from its versatility - samarium diiodide can be used in processes ranging from functional group conversions to elaborate carbon-carbon bond-forming cyclization sequences that result in a dramatic increase in molecular complexity. In addition, reactions involving samarium diiodide often show high stereoselectivity as samarium ions can coordinate to Lewis basic sites on substrates and can direct the stereochemical course of reactions. The ability to fine-tune the reactivity of the reagent by the use of additives and co-solvents is an additional, attractive feature. Although samarium diiodide is used extensively by organic chemists, there is still a widely held view that the reagent can be difficult to prepare and use. In addition, samarium diiodide can mediate such a wide variety of organic chemistry that potential new users are often overawed by the extensive primary literature on the reagent. The objective of this book is to provide a concise, practical guide to the reagent. Rather than being a comprehensive review of the chemistry of samarium diiodide, this user-friendly book adopts an "an all you need to know" approach to the topic. The international authors are well-known for their work with the reagent and their expertise covers current developments in new reactivity and selectivity, applications in target synthesis, co-solvent and additive effects, coordination chemistry and mechanism. The book includes the best methods for preparing and handling the reagent, how solvents, co-solvents and additives alter reactivity, the basic mechanisms of reactions, common transformations using the reagent, and emerging areas in samarium diiodide chemistry. The authors have distilled the extensive primary literature to allow the reader to quickly grasp an understanding of the reagent and its utility. The illustrative practical procedures help the reader to prepare and use the reagent in the laboratory while references from the recent literature allow readers to pursue their interest in the popular reagent. The book also contains many illustrations and chemical schemes.