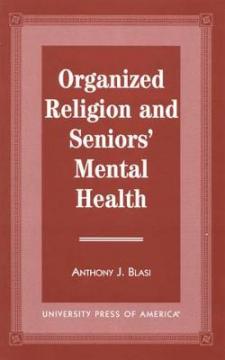 Organized Religion and Senior's Mental Health exposes the role of religion in moderating the stress generated by the common challenges older Americans face, and what churches do to help them in their times of need. Anthony J. Blasi utilizes previous studies carried out in the community of Nashville, Tennessee to discover the psychological impact of common difficulties and the role of public and private religious activity in lessening symptoms of depression that often occur. He found that a feature of faith communities that holds great potential is the opportunity for older people to minister to others who need practical assistance and understanding, including their own peers. Another important aspect lies in the ability of clergy and lay ministers to organize the older people into faith communities and empower them to engage in valuable work, as demonstrated in the work carried out in almost two hundred Nashville area churches.