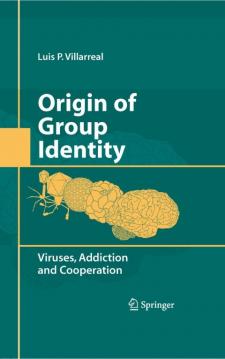 A sense of belonging is basic to the human experience. But in this, humans are not unique. Essentially all life, from bacteria to humans, have ways by which it determines which members belong and which do not. This is a basic cooperative nature of life I call group membership which is examined in this book. However, cooperation of living things is not easily accounted for by current theory of evolutionary biology and yet even viruses display group membership. That viruses have this feature would likely seem coincidental or irrelevant to most scientist as having any possible relationship to human group identity. Surely such simple molecular-based relationships between viruses are unrelated to the complex cognitive and emotional nature of human group membership. Yet viruses clearly affect bacterial group membership, which are the most diverse and abundant cellular life form on Earth and from which all life has evolved. Viruses are the most ancient, numerous and adaptable biological entities we know. And we have long recognized them for the harm and disease they can cause, and they have been responsible for the greatest numbers of human deaths. However, with the sequencing of entire genomes and more recently with the shotgun sequencings of habitats, we have come to realize viruses are the black hole of biology; a giant force that has until recently been largely unseen and historically ignored by evolutionary biology. Viruses not only can cause acute disease, but also persist as stable unseen agents in their host.