Out of the Night and Into the Dream 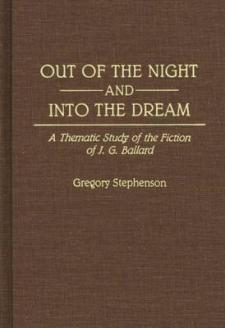 The author of Empire of the Sun and other acclaimed novels and stories, British science fiction writer J. G. Ballard is here given a penetrating analysis, his work being explored in terms of its internal coherence, its continuity and development, and its mythic and metaphysical aspects. Ballard's fiction is widely considered to be a critique of our secular, rational, technological culture, but this study departs from earlier ones that label him a fatalistic or nihilistic writer obsessed with entropy, devolution, and dissolution in showing him, instead, to be most deeply concerned with the redemption and regeneration of the human psyche. With Ballard's focus so much on visionary perception and mystical transcendence, Gregory Stephenson argues for his placement in the Romantic visionary tradition.

A comprehensive examination of Ballard's work, this study traces his output and accomplishments over four decades, exploring their thematic development. Ballard is considered in relation to a number of British and American writers of the post-World War II era--within and beyond the often too-rigidly applied categorization of science fiction, as well as to poets and novelists of the past.