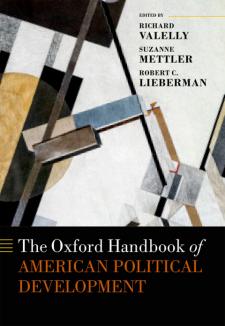 Scholars working in or sympathetic to American political development (APD) share a commitment to accurately understanding the history of American politics - and thus they question stylized facts about America's political evolution. Like other approaches to American politics, APD prizes analytical rigor, data collection, the development and testing of theory, and the generation of provocative hypotheses. Much APD scholarship indeed overlaps with the American politicssubfield and its many well developed literatures on specific institutions or processes (for example Congress, judicial politics, or party competition), specific policy domains (welfare policy, immigration), the foundations of (in)equality in American politics (the distribution of wealth and income,race, ethnicity, gender, class, and sexual and gender orientation), public law, and governance and representation. What distinguishes APD is careful, systematic thought about the ways that political processes, civic ideals, the political construction of social divisions, patterns of identity formation, the making and implementation of public policies, contestation over (and via) the Constitution, and other formal and informal institutions and processes evolve over time - and whether (and how)they alter, compromise, or sustain the American liberal democratic regime. APD scholars identify, in short, the histories that constitute American politics. They ask: what familiar or unfamiliar elements of the American past illuminate the present? Are contemporary phenomena that appear new orsurprising prefigured in ways that an APD approach can bring to the fore? If a contemporary phenomenon is unprecedented then how might an accurate understanding of the evolution of American politics unlock its significance?Featuring contributions from leading academics in the field, The Oxford Handbook of American Political Development provides an authoritative and accessible analysis of the study of American political development.